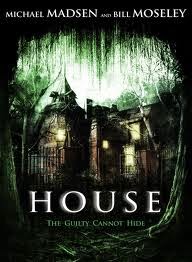 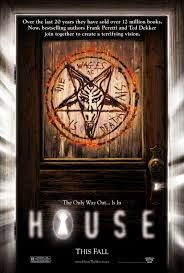 Plot overview:  After sustaining a flat tire on the backroads of rural Alabama, quarreling couple Jack (Rosales) and Stephanie (Dippold) make their way to a run-down Victorian inn.  Inside they find another couple, attractive Leslie (Emery) and hot-shot Randy (Temple), as well as the Wayside Inn's creepy owners, strict Betty (Leslie Easterbrook), eerie son Pete (Lew Temple), and rough caretaker Stewart (Bill Moseley).  The couples then find out that they have somehow attracted a masked killer called Tin Man (Madsen) who has come to punish them for their sins.  Thus begins a nightmarish series of haunting events that challenge their sinful reality.

I've seen bits and pieces of this movie on TV over the years, but I think this was the first time I actually forced myself to sit through it.  This movie has absolutely so much going on that sometimes it's hard to understand/ keep track of what's going on.  Pretty early on we should realize that there are supernatural things going on here; never could we really guess to what extent this spiritual, purgatorial experience would go.

Acting stinks.  It stinks.  That is, at least, for the first say 3/5 and final 1/5 of the movie.  There were some parts when I wasn't poking my eyes out with frustration.  Rosales is pretty brutal all around; lots of demanding close-ups, slow reaction shots: things that are hard to deliver on.  Dippold (what a name) redeems herself a few times, but is nothing super special.  Poor Alana Bale is thrown into the confusing and too-important role of Susan, a good ghost trapped in the house, making the young actress seem poorly trained.  The roles in this movie are just so bizarre and oddly written/ conceived that I can't blame actors for being awkward.  Concerning the creepy inn owners, I do like Leslie Easterbrook a lot; the audience hates her immediately after her first cruel lines.  Lew Temple as Pete is creepy (if stereotypical) enough, and very experienced veteran horror actor Bill Moseley is positively evil as Stewart.  I also loved to hate Michael Madsen in his multifaceted role.

The plot is pretty wild in this movie.  People stuck out in the boondocks of the south is not original but always enticing nevertheless.  As soon as the caretakers show up, we should already feel overloaded with horror stereotypes since they are being unmercifully shoved down our throats.  Creepy, strict hosts with uber-religious opinions, a somewhat deformed son lurking around like something out of Scary Movie 2.  Things certainly do get interesting when the so-called Tin Man shows up, wielding a flashlight and shotgun and a creepy, Leatherface-esque mask.  I honestly did like the idea of Tin Man a lot, and felt that the movie could have been a lot scarier had it only focused on him as well as the house's nightmarish memory chambers that haunts the four victims.

The second that the movie starts piling on satanic symbolism, devil worshiping, maze-like chambers everywhere (like one of Freddy's nightmare worlds), things get out of hand.  Even the individual memory/ nightmare sequences are pretty darn confusing and leave the audience to guess at or invent the characters' backstories.

Aside from the confusing nature of this movie, I thought it did deliver a few scares.  I guess I enjoyed the different types of horror in this movie: interpersonal drama, lingering psychological trauma, utter confusion, and of course a masked murderer chasing everybody and demanding a dead body before dawn.  Horrible memories supernaturally reliving themselves to haunt characters is certainly not new in the horror genre, but House handled this with cool effects (Stephanie on thin ice) and dark, disturbing backstories (Leslie dressed up and forced to eat pies).  Random bouts of terror from all over do help this movie to stay somewhat interesting, as otherwise we watch characters run around and around this hellish maze.

The end of the movie will probably split audiences.  I guess I sort of accepted it and then enjoyed the piece as a whole.  The original novel was written by two Christian authors, which gives more sense and even meaning to the test that the film's characters are put through, yadda yadda yadda.

Final critique:  This movie tries fitting too much plot and action from the original book (I assume), and the result is a sometimes scary but otherwise confusing bundle of mess.  Lots of characters running around, chasing or being chased, with plenty of unconvincing acting and plot that forces the audiences to real think about just what is going on here.  Not a high score in my book, but not a total waste of time either.