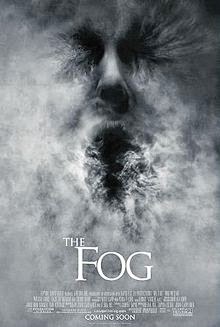 Plot overview:  Just as the residents of Antonio Island prepare to celebrate the town's 134th anniversary, a heavy fog comes in from the sea, carrying within in artifacts and terror from the island's secret past.

I'm going to go against the tide here and boldly declare that I did, in fact, enjoy this movie.  Weird to think that it's coming up on 9 years since this film's release, and this is the first time I've seen it.  Nor have I seen John Carpenter's original version from 1980, although I now plan on it.  In fact, this summer I'm planning on having a marathon of watching either the original or remake of films that I've already reviewed.  Keep your eyes peeled!

Back to The Fog.  I didn't know what exactly to expect from this movie, and was frankly surprised to see such famous faces.  Given three huge personalities from 2005 - namely Tom Welling and Selma Blair - I figured the movie would either be really good or really bad.  Funnily enough, it fell into neither extreme, although online reviews may disagree (and go towards the negative).  I enjoy horror movies with big names on the bill, and I enjoy a sense of drama and plot that early-through-mid-2000s horror usually presents us with (think Darkness Falls).  This film gave us both of those things: faces we recognized paired with beautiful shots of Oregonian (read Canadian) landscape, water, islands, lighthouses, carefree young people on boats- and ghosts lurking around every corner.

The plot was a bit confusing for me at first; I wasn't sure if I missed some sort of introduction, or if the sequences taking place 134 year prior to the film's events were just scattered throughout.  First question: the town was celebrating the 134th anniversary and not the 135th, right?  Why in the world would they celebrate that?  Just to make the film's events take place in 2005?  Then why choose 1871?  I was extremely confused by this detail.  Anyway, we quickly become accustomed to seeing shadows lurking around, with a randomly burnt dog at one point.  For a long while, this film could have gone anywhere.  I was not expecting it to be so centered around actual ghosts, but perhaps rather some monster in the fog.  I guess I was confusing it with The Mist the whole time.  I mean the titles are just so different.  Silly me.

Acting is what we expect.  That is to say, not bad, but pretty standard for our young handsome faces of famous actors in 2005.  In fact, I was overall pretty impressed; the acting is good enough to move the plot along without any problems.  Tom Welling is pretty typical as our protagonist Nick: good looking, innocent, and kind-hearted.  Maggie Grace is a beautiful, lovable, eager-to-get-out-of-the-small-town Elizabeth (adventure she will get!).  One of my personal faves Selma Blair graces us with her dark wittiness as the sensual radio DJ and responsible mother Stevie.  In a smaller but still important role of William Blake, we have the familiar face of Rade Šerbedžija.  All do a good job, if not limited by the standard tropes of horror - dumb scares, near-death situations, nervous shouts of "I don't want to calm down!"  All typical, but still well done.

Scare-wise, most internet reviews will tell you that this is one of the least scariest films of all time, that it shouldn't even be under the horror genre, that it's creators and re-creators are spineless cowards that should be burned at the stake, etc.  Horror Buff disagrees.  I'm sitting here on a sunny day with lots of noise coming in from your average Tuesday happenings around town, and I was still surprised by several of the film's moments.  Yes, plenty of suspense that never actually scares us here.  And also yes, some of the scenes that were maybe intended to be scary become rather dumb, or merely interesting as we watch special effects surprise us and kill off cast members.  Still, John Carpenter is not your average over-the-top screams-gore-and-body count kind of guy, even if the Halloween franchise was perverted into that.  Carpenter, as far as I'm concerned, has always loved a good storyline behind his movies, drawing especially from a more old-fashioned interpretation of horrors and thrillers.

The real question as this film moves along (with well-placed action, scares, and events) is: do we buy it?  Sure, there is this dense curtain of fog moving in, drawing some victims in and leaving some treasures out, and that causes plenty of suspense for a good part of the movie.  What is inside?  What was that phantom pirate-esque ship like something out of Scooby Doo?  Are there sea monsters, aliens, or something else?  Once we piece an obviously-presented background together, we realize that the threat is, in fact, vengeful ghosts.  Who doesn't love a ghost, especially one with pretty darn unpleasant leprosy?  History buffs are sure to enjoy a ghost tale regarding the westward expansion of America.  Thus presented with a colorful backstory and even more colorful (well-done) ghosts, is the audience happy?

If you're expecting a ghost story filled with thrills and violence, this isn't the film for you.  Revenge is handled more subtly in this movie, give or take one or two flaming corpses and a ghostly garbage disposal.  That isn't to say that the movie isn't enjoyable, which I think it was.  Sure, it's all very supernatural, but so many horror movies are.  If you let yourself accept this plot and storyline, I really think The Fog is not a bad watch.

Special effects, especially those of the fog and then of the ghosts themselves, were done very well.  That's a huge plus for the movie, which comes to depend so heavily on them.  I don't think we're even used to seeing ghosts have so much action-packed screen time.  This film would have suffered an even worse reputation had it not been for these great effects.

My biggest thing was the ending of the movie.  Like, what was that?  I guess along with the "blood for blood," generations-long-revenge of the film, we have to accept we're in the realm of reincarnation as well.  Was Elizabeth - herself a scion of one of the town's four founders and traitors against Blake's people - always a living version of Blake's uncomfortably young bride?  Or did the upcoming events of horror and revenge somehow spirit her away into a historical plot?  That kiss at the end was both shocking and gross, but what happened next was even more unexpected, at least for me.  Even though we should of course realize during the flashbacks that Elizabeth has an uncanny resemblance to Mrs. Blake, I for one was not expecting her to so suddenly become a part of Blake's ghostly crew.

Final critique:  This movie does not deserve the horrible reputation is has.  Another reason why you can't always trust Rotten Tomatoes.  Myself living in a very foggy region, this film presents a colorful plot, heavy with background as well as historical and present-day small-town drama that makes up plenty of plot for what scares might be lacking.  Decent acting, fun plot, and an easy watch for those who scare easily (although there are some disturbing images).  All in all, not a bad watch.