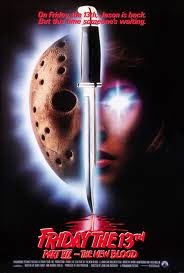 Plot overview:  Sometime after the events of the previous film, Tina Shepard (Park-Lincoln) returns with her mother (Blu) and Dr. Crews (Kiser) to Camp Crystal Lake, where her father died ten years earlier.  Still blaming herself for her father's death, Tina is haunted by bad memories while the conceited Dr. Crews attempts to exploit her peaking emotions to study signs of telekinesis.  On top of the pressure from her doctor, Tina is half befriended and half mocked by the rowdy group of teenagers staying next door.  Not to mention, a strange masked figure has risen from the lake.

Let me start by pointing out that the Friday the 13th movies really do believe in girl power.  Just look at the movie poster here.  Not that Jason ever, ever discriminates when it comes to choosing his victims, which are many (I recently saw a chart of body counts in horror franchises and our boy Jason is #1) - but still, horror movies are generally very giving when it comes to the 'final girl.'  Friday the 13th Part VII throws us a huge curve when we are introduced to Tina Shepard, aka the second coming of Carrie, only with a cool, '80s flare and a loving mother.  Speaking of which, special shout out to the mysterious Susan Blu for portraying such a cool (although somewhat clueless) mom.  Seriously about girl power though: Spousal abuse?  BAM Tina kills dad.  Creepy therapist trying to exploit your psychic powers?  BAM shut him down and run him out of the house.  Jerky girls next door picking on you for being a basket case (we've seen similar concepts with Tommy Jarvis)?  BAM Jason gets them anyway.  Tina is absolutely a rival for Jason; he seems afraid of her, aware of her more so than he is of anyone else.  One even wonders if she's too strong for Jason.

Actually it's interesting that this is the second main character we've had after Tommy Jarvis to have dealt with mental health issues.  Both Tina and Tommy had traumatic experiences as children (as Jason himself must have), and then later in their teenage/ young adult life, society continues to mock them for it, as seen specifically by queen bee Melissa (Susan Jennifer Sullivan) in this installment.  Not only does this affect both protagonists in terms of dealing with a 'boy who cried wolf'-type scenario, but they themselves have to question their own sanity and ability.

Concerning Tina's knack for telekinesis, this whole plot choice leads to a supernaturally gifted protagonist to combat what is now a 100% supernatural antagonist.  In earlier films, Jason/ his mother are (more or less) human.  It isn't until Part VI that Jason is sort of, you know, brought back from the dead, so it's no great mystery that in this film he is all-out zombie.  This becomes especially apparent later in the movie.  Watch it and you'll know what I mean.

I generally enjoyed this movie and was really torn about the score.  I almost went lower until I remembered that while watching it, I was fairly entertained and enjoyed the new teenage bait, the creative kills (I LOVED the sleeping bag/ tree one), and the never-ending body count.  As far as Friday the 13th movies go, I did feel that this one followed the normal recipe, but the psychic powers of our leading lady of course change things.

Acting is very mixed all across the charts.  Most people play up their roles too dramatically in a largely '80s fashion, but considering the ironically light-hearted feeling of the movie, it's not a big deal.  This is the first of four Friday the 13th movies to take on the talented Kane Hodder in the role of Jason.  Mr. Hodder is in the middle of a lengthy and accomplished career of acting and stunt work; some of his credits include Wishmaster, Se7en, and even Waxwork in the same year as this installment.

Speaking of Jason, I think the single most surprising event of this movie was when our killer is unmasked.  What in the world was that creature beneath?  Who knew that coming back from the dead (perhaps two or three times) and spending some time underwater could result in you looking like that?  Perhaps more creative than frightening, I suppose we can attribute this work to director John Carl Buechler who has led a well-known career in the realm of special effects and makeup.

Final critique:  Within the world of Friday the 13th, Part VII: The New Blood manages to surprise us with some new and crazy ideas, while still remaining true to the feeling of the franchise (naughty teens = fresh meat, things popping out of the lake when we least (most) expect it... etc).  I certainly enjoyed the film, but that comes by taking it with a grain of salt and kind of expecting what you're going to get from virtually almost any other film in the series.  If you're looking to start getting into the world of Jason and Camp Crystal Lake, start at the very beginning and work your way through.  If you ignore my advice and go with lucky number seven anyway, prepare yourself for an eerily campy world of '80s teenagers, parties, and of course the dark shadow lurking outside the cabin.