Not to be confused with the 1989 Patrick Swayze film of the same name... 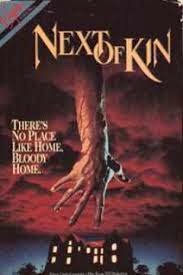 Plot overview:  After years away, introverted Linda (Kerin) inherits a large retirement home called Montclare following the death of her mother.  Shortly after her arrival, mysterious deaths begin to happen.  Through her mother's diaries, Linda learns that this is not the first time Montclare has been plagued by such sinister events.

I came across this movie while reading a short write up on a blog called Drunken Zombie, which I found through the Horror Blogger's Guild, which you should definitely check out.

This Australian film was a pretty enjoyable watch last night right before bedtime.  Be warned though; I had to adjust to the sheer '80s-ness of it all (costumes, even the cinematography itself, which makes the whole thing seem like a made-for-TV-movie) and then also pay close attention to understand the heavy accents.  Once these two steps were completed, I was in for an enjoyable experience.

I thought that Next of Kin presents us with both Gothic and even Lovecraftian horror, though in a very modest type of way.  First and foremost we have Linda and then the voiceover of her now deceased mother; Linda is our young and virginal (albeit more in personality than in action) protagonist, as was made typical by Gothic horror, and through her mother and the diary (themselves the helper and sort of talisman that provide wisdom or insight from the past), Linda is guided and able to better prepare for the horror at hand.  Then of course we have Montclare, a character in and of itself, an expansive old mansion filled with dark rooms and twisting hallways, along with its fair share of things that go bump in the night.

As far as Lovecraftian horror goes, I thought there was a fair amount of detachment and isolation in our characters, not to mention plenty of mysterious pasts and unanswered questions.  Where did Linda go and why did she leave?  Was her mother sane, and is she?  There are an abundant amount of examples of times in this movie when Linda sort of shuts down or finds herself unable to deal with her situation.  While I thought this was both good acting and a realistic reaction to the streak of murders, we also start to wonder how reliable Linda truly is as our protagonist and perhaps savior.  Furthermore, there is really no one in this whole cast that we feel the audience or even Linda can trust, except perhaps her favorite elderly resident at Montclare.  Bruce (Jarratt) seems like a handy and trustworthy (although unfaithful) guy, but how often does our female protagonist's love interest turn out to be the bad guy?  Too often, if you ask me.  Then our obvious suspects are right under our noses: caretaker Connie (Nicolson) and the seemingly dastardly Dr. Barton (Scott).  Who is a poor girl (or poor audience member) to believe in once dead old people start turning up in every bathtub in Montclare?  Between these and many other unanswered (and perhaps unimportant) questions (who is running through the hallways once Linda is alone with our killer in the final scene? etc), even we viewers, safe and cozy in our beds, begin to feel pretty helpless, and Linda's sanity just dwindles down right until the very end.

All that being said, this movie presents us with some really lovely and intriguing horror.  You're sure to get your fill of suspense in this good, old fashioned mystery with some psychological depth and a good, clean ending.  I'm sure that this reminds me of another plot, but I can't quite think of it at the moment.  Oh well, no matter.

The cinematography, aside from looking like a made-for-TV-movie (is it?), is actually very cool and progressive.  I believe that this is the reason Tarantino praised this foreign film, and although at first I found some artistic choices to be out of place, they really only made this movie more interesting.  There are a few times we see the upstairs hallway become elongated and dreamlike, culminating in a scene where Linda is running through the hall and we are shown the 'set' from above, watching her run forward as if she were instead running upwards.  That was very interesting.  Otherwise, this movie boats fantastic transitions between scenes.

Final critique:  I'm not even going to go into who the killer is or any spoilers at all, but without giving that away I want to reiterate that I liked this movie.  The final scenes once we learn about motive and all that jazz were really entertaining, the satisfying reasoning behind our Gothic horror set in the Outback.  There is some fun gore scattered throughout this movie that piques our interest and even surprises us since the plot takes a little while to get started.  Once it does, however, this is a quick watch at 89 minutes.  I would recommend this to all audiences, with its weakest point being that it may seem outdated to some.