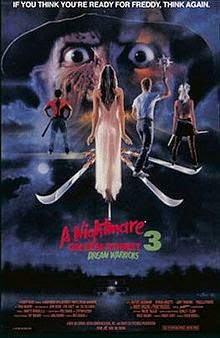 Plot overview:  Several years after the events of the previous film, teens in the area of Springwood, Ohio are still suffering from a terrible and dangerous figure that lurks in their nightmares: Freddy Krueger (Englund).  This time around, however, Nancy Thompson (Lagenkamp) is back, and she has a plan to make the teens more powerful than their nightmarish nemesis.

The movie starts and I see Patricia Arquette, and I think to myself, "Oh my gosh am I even going to be able to watch this movie?"  I saw Boyhood this summer and was simply baffled (and a little frustrated) by her performance the entire time (around 3 hours).  To her credit, aside from putting on some weight with age, Patricia Arquette looks exactly the same today as she did in 1987.  Unfortunately, her acting hasn't changed much either.  In this third installment of the Nightmare on Elm Street franchise, Patricia, in the role of our leading gal Kristen Parker, seems young and naive.  Clearly, she is an actress that only got her start because of her film-famous family.  That being said, Kristen is neutral/ sweet enough that Miss Arquette gives a pretty standard performance, and aside from thinking about how much I didn't like her in Boyhood, she was fine to watch.

The rest of our cast basically gives us the same caliber of performances.  This movie chooses to rely on a small gang of rag-tag teens in the local psych ward, and, as is very much the '80s, we are presented with a vibrantly colored crew.  First we have angsty puppet-making Philip (Bradley Gregg ... who has a decent role in Stand By Me which I told you months ago to go watch), awkward Jennifer (Penelope Sudrow) who dreams of becoming a famous actress, the silent but kind Joey (Rodney Eastman) who we'll be seeing more of, (Latina?) recovering drug addict Taryn (Jennifer Rubin), nerdy and wheelchair bound Will (Ira Heiden), and straight out of Compton "Kincaid" (Ken Sagoes) who we will also see more of in the franchise.  Rounding out the adults in this world are Kristen's glamorous mom (Brooke Bundy), psych ward assistant Max (Fishburne) - casted as Larry Fishburne which is so hilarious to me - caring Dr. Neil Gordon (Craig Wasson), and finally the strict and dubious Dr. Simms portrayed by the familiar Priscilla Pointer who we've seen in Carrie.

The only standoutish performers here are probably Heather Lagenkamp as Nancy, not because she's a particularly great actress so much as because she has graduated from being a stressed, whiny victim in the first film to becoming a stressed out, slightly less whiny fighter in this one.  (Why is it that '80s actresses feel that screaming dramatically constitutes acting?)  Naturally, we have our star Robert Englund as Fred Krueger.  This film is important because a lot of that off colored humor that Freddy is so well known for today starts becoming apparent here.  I was surprised by the sort of dirty, sort of raunchy turn his character has taken by this film.  If anything, it makes him very relatable to teenage audiences (at least of the time), as if he really knew this kids - which he should and does.  His character needs to be playing into the fears of his victims, and in order to do that he has to know who they are and how they function.  Hence begins his commentary on drugs, sex, TV, self-consciousness, and other teen issues and "trending topics."

This film is first and foremost filled with tons of '80s pleasantries: familiar sets and costumes, a generic script, etc.  There was something comfortable about '80s horror, especially in the teen slasher genre, because it was like they always knew what they were getting into.  This movie isn't much different, but it still throws some new, fun plot at us that makes it worthwhile.

The best thing about this movie are the effects, which I've complained about in the prior films.  Like wow I was surprised just how gross and nightmarishly real these things seemed.  Some highlights include:
-Kristen's nightmare when there is a wormlike Freddy eating her and the room is blowing up around her
-The extremely disturbing human puppet sequence.  My skin was crawling
-All those tongues that turn into a nightmare bondage scene
-And especially the disgusting needle sores (the drug content in this film caused it to be banned in some places)

The next best thing about this movie is the plot, which forgets all the victimization of the previous films and instead empowers the teenagers to fight back.  This serves two purposes: making a new plot so that the franchise does not consist of the same movie remade three times, and then it also draws us all in and makes this one of the best and most memorable films in the Nightmare series.  Some things are predictable from the beginning; as soon as we meet Joey the mute I said to myself "Wow I can't wait for him to speak dramatically."  Other things I got wrong, however.  For example, I really expected the prissy Dr. Simms to die at some point in the film.  It seems that Horror Buff makes mistakes, too.

I did have a few issues with the plot.  My main complaint comes from the first time that Nancy attempts group hypnosis with the kids so that Kristen can bring them all into the same dream.  Why do Nancy and Neil get brought into the dream if they weren't asleep?  Or can Kristen take people out of waking reality as well?  Hmm.

My only other big thought on this movie is how I was surprised at times by the graphic nature of it.  Not that it's anything compare to what we see today, but there were a few small things that caught my eye.  I mean, it wouldn't be Nightmare without boobs, so we have that bombshell nurse tricking Joey in one nightmare; nothing we haven't seen in plenty of teen slashers from the '70s onward.  Kincaid's script is beyond ridiculous.  It's almost sad how stereotypically black his jargon is; by the end of the movie it's almost hard to handle.  I think he's the only character that curses in the whole movie.  The drug content is what drew a lot of reactions from raters and audiences.  I mean, for Pete's sake, this movie had an X rating at one point.  We haven't seen that since The Evil Dead, which changed after the creation of NC-17.  Then again, X in the '80s doesn't have the same connotation as it has today, and I'm sure it had to do with a lot of the violence we do see in the film, as well as suicide, talk of rape, etc.

Speaking of which, the disputed origins of Freddy are revealed!  It was kind of interesting to hear this take on his past, which was edited into the final cut of the film but not necessarily the original story Wes Craven had in mind.  "The bastard son of a hundred maniacs" - not to shabby for the start of a monster.

Final critique:  So far in the Nightmare on Elm Street franchise, Dream Warriors has been my favorite.  This is a fun, colorful movie that throws us a few more surprises that the first two films did not.  We learn more about our dear friend Freddy, and we also see his character changing and taking on new personalities.  This is the beginning of the Freddy that audiences today will remember, the crude, perverted child murderer with a sense of humor (because, why not?)  I highly recommend this movie, although some audiences are sure to be grossed out or disturbed by some of the content.  Not too scary of a movie, just sort of disgusting in parts.