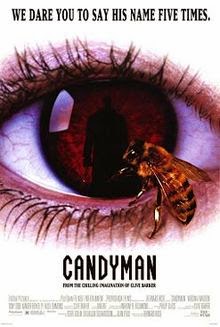 Plot overview:  While doing research for their thesis on urban myths and legends, grad students Helen Lyle (Madsen) and Bernadette Walsh (Lemmons) come across the tale of Candyman (Todd), the vengeful spirit of a man who died a cruel death at the hands of a lynch mob a hundred years before.  As Helen's obsession with Candyman grows, however, his power leaves the realm of myth and consumes Helen's reality.

(Doesn't the poster remind you a lot of The Silence of the Lambs'?  They were only released a year apart.)

I love this movie.  I remember when I first started to catch bits and pieces of it on TV during Halloween marathons when I was in high school.  The first time I was finally able to to see the whole thing I knew I had stumbled upon a new favorite.

This movie is just very well done, combining the worlds of horror, (psychological) thriller, mystery, and drama into a chilling, exciting film that leads us through twists and turns right until the end.  Perhaps what I most associate with this movie is it's haunting score, which was written by Philip Glass.  From the opening credits, we are introduced to his music, filled with a dark, operatic chorus that we usually associate with satanic occurrences.  Otherwise, we have tons of catchy piano music that sticks in our heads as the film's horror, drama, and beauty plays out.

Acting is very good in this film.  The show is stolen by Virginia Madsen in the role of Helen.  She's beautiful, charming, intelligent, spunky, and dedicated.  While the cinematography highly favors those clips of her eyes, lit amongst the darkness, we are shown many sides of Helen's character, especially as she declines into the confusing turmoil of (being told she's) losing her mind.

Complimenting Helen in his mystery and skillful hypnotism we have Tony Todd as Candyman.  Todd (Wishmaster, Final Destination) is often kept as a dark, mysterious character probably due to his large build and deep voice.  I like Candyman a lot because he isn't straight-up terrifying like many horror villains, but rather the terror flows from him in other ways, such as his wonderfully written script and descriptions about death, and then of course the gruesome and forceful way he murders his victims.  Candyman's perpetually dripping bloody hook is quite disturbing.

Supporting our two stars we have a well-rounded cast of good guys, not-so-good-guys, and perfectly ambiguous guys.  Notably, we have Kasi Lemmons as Helen's steadfast best friend and colleague Bernie, and then Xander Berkeley (who has been in so many movies and TV shows) in the role of Helen's dubious husband.

As much as I love this movie, I'm not actually going to give away much plot here.  While this movie is filled with beautiful content and poetry, it is not the scariest film out there.  Most of the horror in this film revolves around the mystery and gore that follows the legend of Candyman.  This movie does gore well.  Seeing as Candyman chooses to gut his victims with his hook, we have some pretty nasty images of opened-up corpses.

Otherwise, the scares are pretty cheap and fun, and I'm okay with that.  There are lots of surprises in the movie, with characters popping out from behind doors etc, rounding out the film with some good jumpy moments.

Fun fact: Candyman was born of a short story called "The Forbidden" written by Clive Barker, creator of the Hellraiser series.

Final critique:  I really love this film and recommend it to anybody.  For queasy audiences, get ready for lots of blood and a decent amount of gore, but know that these are probably also the scariest scenes in the movie.  Otherwise, Candyman is a really enjoyable, interesting film about myth, possession, and belief filled with convincing acting and a haunting score by Philip Glass.  I highly recommend this movie during this Halloween season!