Final installment of my Friday the 13th marathon from last week. 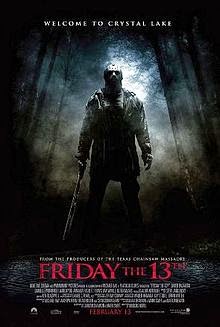 Plot overview:  30 years after the events of the original film, new groups of teenagers start returning to Crystal Lake without any idea of what they are getting themselves into.

Somehow, some way, I don't know where I was in 2009 for the release of this film.  It squeezes right along with all of our snazzy 2000s remakes: Rob Zombie's Halloween (2007) and Halloween II (2009), When A Stranger Calls (2006) [I've seen it half a dozen times I'm shocked I haven't blogged about it], A Nightmare on Elm Street (2010), and Nispel's own The Texas Chainsaw Massacre (2003).  In fact, I believe that this remake/ reimagining of the 1980 classic has been the most financially successful out of all of these - and that should be no surprise, because I think this movie is fantastic.

This truly is a Friday the 13th for modern audiences.  Slasher fans should be thrilled with this reboot, which takes most of the original plot and amps it up into a more fast-paced, blood-soaked contemporary butchering of yuppy millennials.  While this movie has a pretty 2000s feeling about it (like the aforementioned remakes from this decade), there is also a sense of the '80s that the other movies lost in the remake process.  Although this version introduces all your stereotypical teens, we do not forget our roots.  In fact, I felt there were a good amount of tie overs to the original film (e.g the wheelchair we see in Jason's (Mears) lair could have been Mark's (Tom McBride) in Friday the 13th Part II.  Details like these are so important throughout lengthy franchises because it gives everyone - characters and audiences alike - a sense of home and comfort, familiarity and reassurance.

The deaths in this film are pretty fantastic.  On one hand, many of them are taken off-camera (which of course I wasn't crazy about).  On the other hand, 1980's standards have been long forgotten, and the thrill-seeking, gore-hungry audiences of the 2000s are being appeased.  This film is gritty, dark, and unafraid to show off the reinvented Jason.  Our old friend Jason Voorhees may be older, but he has become even stronger, less human, and more wrathful.  He is swift, creative, and unforgiving, and his iconic mask has been included to all of our great pleasure.  There are some really fantastic death scenes in this movie as Jason has graduated from machetes and knives to much more savage tactics - or even just his bare hands.  That's not to say he doesn't still pick up a classic weapon (after all the machete has a lot of significance to this franchise), but we get to witness some pretty powerful stuff here, such as a sleeping bag turning into an oven for humans, which no audience member is soon to forget.  And if you've read my Friday the 13th write-ups before, you know how much I love a good tent or sleeping bag murder.

Overall, in terms of cinematography, acting, action, and deaths, this movie is very akin to The Cabin in the Woods.  Throughout the movie, I was constantly reminded of the clever yet dark (and still very teen) nature of the 2012 horror satire.  All of our characters are pretty so-so, and I personally didn't care too much about Clay's (Padalecki) plight.  If you've seen any Friday the 13th movie before, you should know what's going to happen, and what's in store for all of our new, unsuspecting teenagers.  Like any modern teen slasher, the question isn't so much who will get killed or when, but rather how? How indeed, Jason?

In fact, watching this will probably inspire me to blog about more of those 2000s remakes.  Check back in November.

Final critique:  I watched this film about a week ago (*cue the music*), so I don't remember every detail and I won't drag on my review.  All I know is that I was very pleasantly surprised by this remake/ reboot, and I hope to see it again soon.  I would recommend this movie to anybody (although I would have them at least try to watch the original first), but be warned about a decent amount of gore or off-screen gore.  The best way I could describe this movie, as taken from the brief notes I took while watching it, is "badass."  I highly recommend this modern retake on a horror staple.