Fair warning: It's that time of year again!  AMC Fear Fest is in full swing, and I've been away from it for so long that now it's the only thing I've been watching.  This week they were doing a Friday the 13th marathon, and I watched parts VIII through the 2009 reboot (still missing Freddy vs. Jason) - so just be prepared for the next few posts! 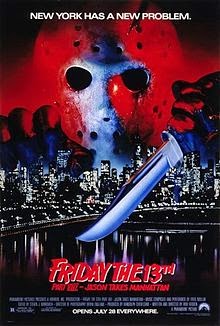 Plot overview:  After being resurrected by a surge of electricity, Jason (Hodder) climbs aboard a boat full of high school seniors sailing to New York to celebrate their graduation, making it a trip they'll never forget... or survive.

I'm glad that this movie is from before my time.  Even as a child, I would shun this movie while pacing through the aisles of Blockbuster.  Anyone would tell you the same thing: the concept here is stupid.  That being said, there's still something funny about the entire plot here, namely that it is ridiculous.  Like hands down.

First of all, this movie totally revamps young Jason from when he is drowning.  Instead of using stock footage of Jason in the lake, they brought on new child actor Timothy Burr Mirkovich who becomes fairly important to the plot here given our star Rennie's (Daggett) pathology.  To me, however, totally redoing the Jason drowning separated this movie from the original and even from its predecessors.

Next, while the intro to the film looks like the Crystal Lake we know and love, the exposition that introduces us to the boat and cast of future victims clearly takes place in the Pacific Northwest instead of in the Western Jersey/ Pennsylvania landscape it should; Horror Buff really dislikes continuity errors like that.  Also, like where in the world are these kids setting sail from?  What high school goes out to sea to sail on a ship called Lazaurs (ugh real original) to New York City for a senior class trip with only two adult chaperones (not counting crew - one of whom is our go-to harbinger of doom)?  It's bogus.

In fact, the students themselves are pretty bogus caricatures of '80s teen stereotypes - and by stereotypes I mean extremes: the all-out rock star and her guitar, the dedicated boxer (V.C. Dupree), the super bitchy popular girl (Sharlene Martin) and her wannabe... the list goes on.  I guess it stands to argue that most teens in horror movies are extreme stereotypes (epitomized by the satirical The Cabin in the Woods), but still, this is pretty wild.  The main mean girl, I must say, is super ridiculous, going so far as to push Rennie off of the boat and hook up/ frame the jerk biology teacher (Richman). Whattt?  Like classic prank I guess.  Also congrats to Mr. Richman for being the absolute worst teacher/ character of all time as Mr. McCulloch.

Furthermore, even when they do arrive in some pre-Giuliani NYC (they're only there for maybe half an hour of the film - the rest takes place in and around the ship that looks an awful lot like Freddy's nightmare realm), it's depicted as a totally run-down town filled with gangs and toxic waste in the sewers (thanks A LOT for the stereotypes, Paramount.  At least there were no crocodiles), and at the end of the day, we realize it's clearly filmed on sound stages and in Canada.  At least there is a cheesy Statue of Liberty necklace that tourists probably rushed to stores for afterwards.

Luckily this movie offers us some fun and creative deaths, specifically in the sauna scene that ends up looking like something out of Indiana Jones *Aum Namah Shivaya*  I also loved Julius' downfall after attempting to box with Jason.  Silly kids!

Final critique:  But aside from some really bad acting and a really terrible plot, this movie is still pretty enjoyable, it just needs to be taken with a grain of salt.  A large grain of salt.  This movie is just about as ridiculous as the title implies, and a lot of it ends up looking like something out of "Goosebumps."  Zombie Jason is pretty foul, as per usual, and with the inclusion of a needle scene (much more tame than in A Nightmare on Elm Street 3), I think there is plenty to be grossed out by.  I would say most audiences could handle the movie - it generally isn't very scary or gory - it's more so a matter of having the patience to sit through it.