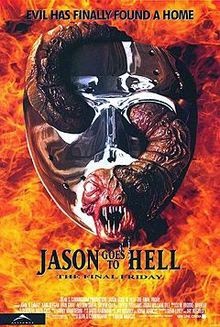 Plot overview:  Although his body has been destroyed, Jason's (Hodder) heart begins to possess the bodies of innocent victims in a quest to return to the Vorhees bloodline so that he can rise again.

This is going to be a brief review based off of a few notes I took while watching this movie yesterday on AMC's Fear Fest.  I was simultaneously cooking a large roast pork loin (Horror Buff is such a renaissance guy), so I'm afraid my heart was not 100% in the movie.. unlike Jason's!  *ba da psh*  Anyway, as soon as this film came on I realize that I saw it just a few years ago, so I remembered a lot of the plot and whatnot.

I think this is a pretty fun installment in the Friday the 13th franchise, and if one thing is for sure, it's better than Jason Takes Manhattan.  That last bomb was the reason Paramount sold the franchise to New Line Cinema, which says a lot.  I can see where a lot of dedicated fans wouldn't be happy about this movie since Jason is gone for most of it; any film that takes a big step away from the familiar plot is sure to upset people, regardless of the caliber of the movie (think Halloween 3).  Horror Buff for one likes the idea of Jason's heart being its own reanimated, automatic monster, reminiscent in a very creepy slimy way of Slither and even The Faculty given its parasitic nature.  I think that the prop/ puppet is equally gross and awesome.

The intro to this movie is super random and opens up a lot a lot of questions as to how the government could have tricked Jason like this.  Setting up the girl in a cabin is all pretty meta, and then when the very '90s action and gunfire and explosions set in, I think most dedicated Friday the 13th fans will find themselves unsure about what they've gotten into.  Also, his body certainly blows up, but then I think I remember we see a pretty intact corpse on the table in the morgue... maybe I'm wrong.

The movie is fairly plot heavy and involves a lot of returning to where it all started, going back home, and involving family - which we've 100% seen done time and time again in horror movies regarding killers' pathologies.  In fact, the Halloween franchise also did this later into the series, and one can extract that its just a way to keep pounding out plot and movie scripts.  The idea of giving Jason living family members is also pretty interesting, though we've seen the whole killer-hunting-family members-unbeknowst-to-them thing before, namely in Halloween.

One thing that can be said about disembodying Jason here is that it takes the terror out of its typical, predictable form and unleashes it.  It's one thing to be scared of the masked figure smashing into your home and a totally different thing to have your significant other suddenly attack you and try to vomit a giant black bloody mass down your throat.  What's important here is the soul of Jason, which is a breath of fresh air after 8 previous movies that play with his body in child form, adult form, and numerous reanimated zombie forms.  While we might miss our dear friend in the hockey mask, it's not bad to see the plot get switched up for once.  Plus, we get plenty of really gross scenes involving characters throwing up that pulsating, serpentine heart.  Think lots of black blood, physical violence, and of course an unidentified black mass slithering around the floor.  Nasty!

I have to say special shout out to Rusty Schwimmer in the role of Joey B. at the diner for looking so darn ridiculous - just as I imagine a diner waitress in western Jersey might look.  She's legitimately what I remembered most vividly about this movies.  Lastly, she's also very entertaining in A Little Princess.  There, I said it.

The most shocking thing about this entire movie is, of course the very ending.  The last 5 seconds of this movie probably left audience members with their mouths gaping and their jaws stuck to gum on the floor of movie theaters.  Others I'm sure probably left the movie super super excited for what was to come.  Little did audiences know then what production hell can do to a film and franchise.  I won't ruin this surprise ending for you here, you'll have to go watch to find out!  And then wait 10 years for anything to come of it.

Final critique:  Like several other movies in the franchise before this one, Jason Goes to Hell was sincerely intended to be the final movie in the franchise (not withstanding any spinoffs or combinations with other super villains).  And, like several other movies in the franchise before this one: that was not the case.  Friday the 13th is a pretty awesome example of a movie franchise that didn't know just when to quit, but luckily for them they didn't suffer too much for it.  While Jason Goes to Hell takes a big step away from our typical stalker in a hockey mask plot, I really think this is a pretty creative film that through its difference provides us with some creepy horror we aren't used to seeing in this franchise.  This film is pretty disgusting at times, but overall I wouldn't say it's that scary.  Certainly a fun watch, and keep those eyes peeled for the last few seconds of the movie!