(but is it really that surprising?) 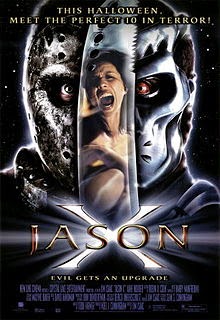 Plot overview:  After breaking out of confinement in a government center that has been studying Jason (Hodder) to learn more about his heightened cellular regeneration, government agent Rowan (Doig) accidentally seals herself along with the masked killer in a frozen stasis chamber.  445 years later (how often do you say that?), both bodies are discovered by students and researchers who have returned to Earth for investigation.  They unfreeze and totally restore Rowan, who warns them about the danger of taking Jason onto their ship.  Unbeknownst to them, Jason isn't the only one who's been rejuvenated; he hasn't forgotten his murderous instinct either.

You know how some movies just give a franchise a bad reputation?  This film isn't awful -it's just wild.  Like hands down, any way you look at it, flat out ridiculous.  While Freddy vs. Jason was in production hell, someone brainstormed a wacky way to bring the franchise back onto the silver screen so that people wouldn't forget about it.  I mean, we're talking almost 10 years since the last movie!  The result of a crazed attempt to keep the series relevant and impatient fans satiated?  Ladies and gentlemen, I give you Jason X, aka "Jason Takes Space".

If something nice has to be said about this movie, it is pretty entertaining in a wild, "Zenon: Girl of the 21st Century" kind of way.  Picture lots of outdated ideas about the future and a very synth-heavy soundtrack (but still by Manfredini!!).  In a way, this whole movie is about rejuvenation, about taking something from the past and revitalizing it (as we see throughout the movie via nanite medical stations).  This mirrors the fact that Jason X really was a revitalization of one of horror's most well known (and top 5 most successful) franchises.  To treat fans, this movie even gives Jason a new, epically badass look.  We appreciate the gesture.

Anybody watching this movie is just going to have to accept how ridiculous it is, and then either run with it or turn it off.  I think that putting this film so far into the future in order to avoid continuity issues was a super clever idea, especially because I think the Friday the 13th series already had some confusing dates and events for those who take the time to map everything out on a timeline... imagine that... ha ha ....  On another cool note, out of all the movies you've seen, this is probably one of the ones that takes place most into the future.  Of course, it's beaten out by both Bill and Ted's Bogus Journey and Excellent Adventure.

One of the things that truly impressed me about this movie was one of the first deaths we see.  When Jason fights Adrienne (Kristin Angus) early on in the movie, he dips her head in liquid nitrogen and then proceeds to smash it against the counter.  While even Mythbuster busted this myth, it was still really awesome to watch.

Another death I really appreciated watching was when Jason was inside of the holographic projection game thing that the crew members use and found himself at a simulation of Crystal Lake.  We see him catch a girl inside of a sleeping bag and bash her repeatedly against a tree.  This is a really great nod to the earlier films, as I'm pretty sure he's actually killed someone this way before.  Looking through my blog entries right now though, I unfortunately cannot find when.  Maybe I'm mistaken, but it's such a badass move I associate with Jason.  I love any killings involving tents or sleeping bags, or Jason taking innocent campers by surprise.  The holographic simulation also plays heavily on the very stereotypes (and breaking of my rules) that the earlier films in the franchise depended on for victimization.

A nice throwback to the earlier films was especially nice in this film since it's so different than the other Friday the 13th movies.  As this franchise moves along, we see a lot of changes that we don't always love.  Taking Jason away not only to space but to 2445 really distances us from the killer we love and remember.  On the flipside, the upgraded, futuristic Jason is certainly a cool thrill for audiences.  The fight between Jason and the Android Kay-Em14 (Ryder) is also probably my favorite part of the movie.

Final critique:  I don't know what else I could say about this movie.  The acting is not great, the plot is actually ridiculous, but at the end of the day I suppose it's just another crazy installment into the Friday the 13th franchise.  We've come a long way from Crystal Lake, folks.  Not to scary of a movie (at all), more nerve-wracking in action scenes than anything in terms of fear.  I could see where most people would think this is just a stupid movie (which have always been my thoughts on it), but I have to say now after watching that, while silly, this movie isn't that terrible.