(Preliminary note: during the previews, I saw an extended trailer for Insidious: Chapter 3, set to release in 2015. It looked pretty fun.) 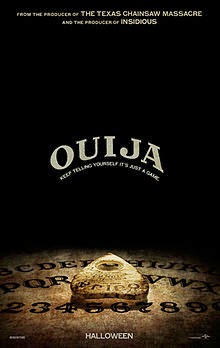 Plot overview: Following the apparent suicide of her best friend Debbie (Hennig), college student Laine (Cooke) is left with questions she thinks only a mysterious ouija board found in Debbie's attic can answer. Once she and her friends make a connection through the board, however, they realize that the game isn't so easy to end.

*Quick funny story: During a fairly scary moment of this movie, the screen at the movie theater I was at went totally dark, leaving myself and the only other two people in the theater in the pitch black beneath the sounds of screaming coming from the scene. Talk about freaky.

Following a few years of development, Ouija finally debuted just in time for the Halloween season. I went to see it tonight, and while the critics might be saying otherwise, I found it to be very enjoyable. Like most horror movies these days, Ouija relies heavily on the well-timed, dumb scares that are sure to make eager teenagers scream with delight while veteran horror-goers frown in their cynicism. I found that if I lighten up and allow myself to enjoy it, it makes the whole experience better. In doing so, you'll find a lot of reasons to walk out of Ouija with a smile on your face.

This isn't the first movie we've seen involving a ouija board (think The Exorcist, or Witchboard and the sequels it spawned). One thing I can appreciate is a horror movie that cleverly creates merchandise to go along with it (like masks or costumes). Creating a fictional horror and then manifesting said horror into something tangible—and sellable—really helps bring that horror to life. A good example would be Friday the 13th or Halloween with the old school hockey or Captain Kirk/Michael Myers masks, respectively. In this case, the inverse is true, and Hollywood has taken a century-old toy (conveniently owned by Hasbro today) and decided to revolve the horror around it.

The babysitter I went to as a kid had an old ouija board buried among the stacks of old games in the playroom, and as very small children, we tried our hands at it more than once. Someone always cheated, but it was fun to pretend that we were making some sort of contact with **the beyond**. We never did, but after seeing this movie, maybe that was for the better.

Ouija is no different than most horror movies we see these days. But the important thing to remember is that that is not a bad thing. Across all genres of film and literature, plots have held countless parallelisms since mankind first started telling stories. Most stories share similar characters and teach the same lessons. With Hollywood pounding out movie after movie after movie and with TV going through a golden age, what's important in film today are the nuances that differentiate one movie from another.

Sure, Ouija presents us with another group of good looking, "college-aged" kids (even misfit kid sister Sarah (Coto) is always perfectly coiffed) who meddle into something bigger and badder than them, and it's only a matter of time until they get knocked off one by one. Okay, so we've seen it. So what? Horror films are becoming less and less about the what, but instead about the when and how. How is this board game going to kill these 20-somethings and when? For better or for worse, creative deaths are what keep so many horror films going these days.

It's for this very reason that I am a staunch supporter of predictable and corny scares. We all live for those *boom* moments that turn out to be nothing. Ouija is filed with them. Chock-full. I don't care if these are "cheap scares" or not— at the end of the day, a scare is a scare, and not every film is going to be a new masterpiece anyway. More power to the movie that can create new, truly terrifying scares (there's plenty of them all the time, and plenty more to be done), but if audiences are going to see horror movies to get some kicks, then I think there should be plenty of "cheap scares" that will at least ensure these people have a good time.

While Ouija perhaps does the boyfriend-lurking-around-the-corner-whoops-didn't-think-it-would-scare-you-sorry-babe-lol one too many times, all of these small scares are fine details that maintain a sense of thrill and terror throughout the film. Ouija not only gives us these, but it gives us plenty of teases, too. From pretty early on, there is some major foreshadowing that might get us anxious in the moment, but ultimately ruins the surprise.

Okay, so I've defended the heavy usage of flashlights rolling off and illuminating things we'd rather not see, or creepy reflections or shadows cast against the wall— so what else is there to this film?

I mean, the plot is fun. We have a pretty decent mystery here with an expected, whoops I mean unexpected twist that keeps the evil board in our lives just so much longer. While I wasn't surprised by some red herrings in the plot, I thought it was really fun, and who doesn't love a fun appearance by Lin Shaye (Insidious, Insidious: Chapter 2)?

If you were to ask me about acting in this film, I would probably smile and shrug. It's exactly what you expect. I like Olivia Cooke in Bates Motel, and I liked her in this. She has a certain collected coolness about her —along with an undeniable macabre—that I think will keep her popular in horror as time goes on. Our other characters were fine, paper thin, and trying desperately hard to be realistic. Hey, Hollywood— you want realistic? Try casting less hot people all the time. In a horror movie, girls' hair should not always be perfect. People should not always be beautiful and muscular and perfectly dressed. This needs to stop. We want more realistic films and we want them now!

There is legitimately zero diversity in this film. Aside from a weak attempt of the casting of Vivis Colombetti in the role of "Nana," thus leading us to believe that Laine and Sarah are perhaps Latina, there is just nothing. Even Bianca A. Santos as capricious friend Isabelle seems pretty whitewashed. I don't know what's worse: Forcing one unimportant minority friend into a white-horror plot, or just leaving them out completely. Do better, casting team. Not too great for 2014.

The settings, however, were very cool. While the scariest thing about Debbie's house is the overpowering wallpaper that changes in every room, I thought it was an equally pretty and eerie home in which this movie could take place. But I digress.

Somewhat surprisingly (?) this movie ends up being largely about sisterhood and the bond shared between females. We've been seeing a lot of this lately, and the more I see it, the more important I think it is. Females in horror have long been pretty limited to their roles. On one hand, we've always had the scream queen star or kickass final girl. On the other hand—and perhaps the dominant one that most people focus on—we have the sexploited, dumber girl that gets murdered while in a bra and panties (or less). And more often than not, even the nerdy girls are usually very attractive underneath their deceptive outfits or bad glasses, and they get exploited as well. Lately, however, horror movies have started focusing on female characters in the roles of mothers, sisters, and daughters, stressing the importance that family has in overcoming horrifying or even supernatural circumstances. I'm talking about taking a step further than letting a teenage girl fight back against her victimization (Halloween, Friday the 13th, or A Nightmare on Elm Street) and entering the realm of Ripley, or Clarice Starling, or especially a character like Carrie White who takes the horror into her own hands. Why is it that horror movies, perhaps even more so than any other genre, are constantly coming out with new blockbusters with a woman in the lead role(s)? Sure, there's a sense of empowerment behind it, but I honestly think it makes the story more relatable to the audience. We can sympathize more easily with female characters because often they are acting out of love, especially when playing familial roles. It is this love, furthermore, that usually combats the evil at hand most efficiently. Let me work more on my feminist theories. In the meantime, let me say that what we need more of is female antagonists. Bring 'em on!

Ouija's other strengths lie in the beautiful cinematography by David Emmerichs and what I thought was a quaintly powerful score by Anton Sanko. Even if the acting is only so-so, at least we get to see and hear some pretty—and creepy—stuff.

My biggest problem with this movie is that everybody and their (grand)mother knew the word "planchette," referring to the sort of iron-shaped, mystic tool that moves on the ouija board. I understand that this is what the ouija accessory is called in real life, but why in the world would every character in the movie know that, too? Have you ever heard someone use that term in casual conversation? When we first hear 8-year-old Debbie (Claire Beale) so keenly pronounce the word "plan-chette" my skin crawled. We heard it at least four of five more times in the movie, and each time I wanted to throw my small popcorn at the screen. I speak Spanish, I know "plancha" for iron, I get that we use a lot of French in English— but planchette?? Spare me. This is a smaller detail within a larger problem— the script. For once in my life, I just wish horror movie writers would run the script by a group of 20-somethings to approve of the script before filming. (And maybe, just maybe that 20-something could be me). More than a few lines and scenes of this movie cause a younger audience to raise an eyebrow. It's a fine line between saying "my folks will be home any minute" and saying "hey you wanna' come over for a game night? hashtag ouija hashtag planchette." At least these characters seemed modern; I thought the heavy use of Macs and iPhones—especially the flashlight—was very good and relatable.

Final critique: Don't let the critics dissuade you from seeing Ouija. Or, if you feel like waiting, definitely rent this movie once it comes out, and have yourself a merry little scary movie night at home with friends— I know I will. This movie is filled with plenty of *boom* moments and playful "cheap" scares that will make it worthwhile for the thrill seekers amongst you, but even the scariest moments shouldn't be too much for the scaredy cats out there. If anything lasting will haunt you after this movie, it'll probably be that you'll never want to floss ever again. Not that you do already. Besides, if Ouija proves to be too scary for you, just remind yourself it's only a game. Or is it?