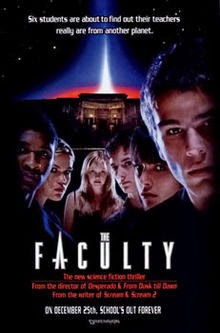 Plot overview:  In the small town of Herrington, Ohio, things seem pretty boring and normal until a group of teenagers from the high school begin to suspect that something very weird is going on with the teachers.

This movie is wild.  Not necessarily because of the action and plot (which aren't bad), but mainly due to how damn star-studded this silly teen scary scifi flick is.  This is one of those films, along with Darkness Falls, that I used to watch all the time with some of my friends growing up.  I don't think any of us realized then just how many stars from now and then there are in this movie; it's absolutely wild.

As our starring gang, we have Josh Hartnett (same year as Halloween: H20) as the brainy but unmotivated Zeke, Elijah Wood as the nerdy and bullied Casey, and familiar face Clea DuVall (American Horror Story: Asylum, The Grudge) as goth outcast Stokes.  Then, as our leading adults that are sure to make any teen wary of growing up, there's a few very familiar names, but the biggest have to be Piper Laurie (Carrie) and Salma Hayek - who are both in surprisingly small roles - as well as Jon Stewart and the guy who's been in everything (but most importantly Grease 2), Christopher McDonald.  There are plenty of other familiar faces in this movie, such as Usher (*yeah*) - which, at the end of the day and 16 years removed - makes for an awesome watch.

Given this crazy cast, the acting is all pretty much what you'd expect from a '90s teen horror/scifi/mystery, which is to say... okay.  The screenplay is by Kevin Williamson (Scream, I Know What You Did Last Summer, Halloween: H20, current series Stalker which has been fun so far), so there's plenty of corny but intriguing teen-ness to the whole project.  What's not to love?

In general, this movie isn't too scary, but there are certainly scares and thrills (more thrills than scares) and, more often than not, jumpy moments and some mild gore that makes us shudder.  The mystery itself, plus all the paranoia (think of this as a teenage, '90s version of Invasion of the Body Snatchers meets Slither) is really what drives the film.  It's very fun trying to guess who has been taken over by aliens and who is innocent.  Again, regarding horror, there are some fun scares, like the type that make you want to watch this movie with friends and popcorn in the dark or during an innocent Halloween marathon.  There's nothing too dark here, but rather a more ominous horror that the movie makes obvious.  If aliens were going to come invade America, why not use the back door? (Which is apparently Ohio).

Final critique:  This is a fun movie.  The plot is enjoyable, the terror is mysterious and occasionally gives a small thrill, and most of the time you're just entertained by the cameos.  There isn't too much real horror in this film, but there is some gore and a few scary moments, plus a pretty impressive antagonist.  All in all, this is an easy watch that I would recommend to anybody.