I get it: I missed a month and a half. That doesn't mean I wasn't watching horror movies, it just means I wasn't blogging about them afterwards. October really pooped me out. Started a new job recently as well, so while that's great, it definitely means I need to be conscious about when I can blog. No worries though, the Horror Blog lives on! 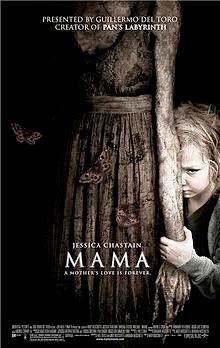 Plot overview:  After having a breakdown, Jeffrey Desange (Coster-Waldau) kills several people and kidnaps his daughters, planning to kill them as well. After crashing his car, however, he and the girls end up in a cabin where he is killed by a dark specter.  Years later, Jeffrey's twin brother Lucas tracks down his now-feral nieces, Victoria (Charpentier) and Lilly (Nélisse), and wins custody over them. Lucas and his girlfriend Annabel (Chastain) take in the girls and move into a new home, all sponsored by the local clinic and Dr. Dreyfuss (Daniel Kash), who visits the girls in order to study them. Shortly thereafter, the dark specter begins appearing again, stopping anybody who tries to get close to the girls.

Strange. Dark. Beautiful. Those are the words that come into mind after watching Mama. I missed the very beginning of the movie as it was on TV, but I stuck it out till the end and generally enjoyed what I watched. Let's break it down.

This movie is nothing we haven't seen before, with plenty of aspects borrowed from here and there, twisted and contorted and turned into something interesting but not entirely original. Still, does any film or literature exist outside of previously existing themes, cliches, and plots? Mama tells a story with fairytale facets, much like Don't Be Afraid of the Dark or Pan's Labyrinth. This movie has Guillermo del Toro written all over it: the dark cinematography, a child in danger, and an evil (contortionist) creature. There is a cartoony aspect to Mama, with painted, sepia flashbacks, numerous dream sequences, and swirling black nothingness oozing from the walls. Fairly often throughout the movie, I was reminded of Tim Burton. Still, this odd combination that pushes the boundaries of reality and fantasy tells a new take on an old tale, and the result works.

The actors in this movie get the job done. I love Jessica Chastain, so it was interesting seeing her in the role of an unmotivated mother-by-accident – it was weird seeing her with black hair, too! I am a huge Game of Thrones fan, so it was cool to see Nikolaj Coster-Waldau outside of the role of Jamie. Both actors did pretty well, considering that I don't think Lucas had much to work with and Annabel is a cliche role. The fact that Chastain's Annabel wasn't annoying is a success in my book. The child actresses Megan Charpentier and Isabelle Nélisse both did commendable jobs. I liked Daniel Kash in the role of Dr. Dreyfuss; he wasn't too evil or sleazy, so that made him more likable. Finally, Javier Botet (REC) as Mama was a creepily, well-played physical role. Botet's Marfan syndrome make him a perfect character actor for roles like this one.

Scares in this movie are pretty well done; again, nothing we haven't seen before. There are a fair amount of jumpy moments as well as some thought-out suspense. Creepier moments in the film involve the shadow in the mirror early on (I love reflections and shadows in the background) and any twisted moment with Mama, such as when she crawled down the hall à la Exorcist spider walk. As much of the film is melodramatic, scares become intertwined with humor and drama, resulting in an overall mellow tone behind the frights.

I was interested in the film while watching, but I think it was the ending that really tied everything together for me and left me with a favorable taste in my mouth. There is this whole vengeful, offended woman plot – in this case Edith Brennan, who had her child taken away when she was sent to the mental institution – who is wronged in her death and remains as a ghost. The fact that this is not an original ghost/ haunting plot is fine by me, because the more we instill the theory that ghosts are wrong humans bent and twisted in misery, forced to relive their misdoings, the more people believe that ghosts exist. It's a cool thought for social theory. Anyway, like any wronged female ghost (Darkness Falls, Dead Silence, The Woman in Black), we expect their to be some sort of simultaneous redemption/ banishing at the end. Mama tricks us into thinking that that final moment is at hand, when Mama herself gets angry all over again and tries to kill the two little girls. Most shocking moment? She half wins. Going way against one of my most founded cardinal rules, Mama gets away with Lilly at the end, sweeping her away into some sort of beyond. I was totally shocked that this happened, but at the same time, I was okay with it. Mainly because Lilly was so feral and I didn't like her, but also because there was this beautiful moment of serenity and love when Mama and Lilly are falling together, laughing in each other's presence. Then they burst into a thousand moths, at least one of which is light blue and lands on Victoria, as if to say that Lilly were still with her.

Finally, at the very end of the movie, we truly appreciate Fernando Velázquez's (The Orphanage) powerful score as it plays over the end credits. It really tied everything together right there in the final moments.

Final critique: This movie had a lot to it, but it tied all of the plot details together and worked out in the end. I need to sit and re-watch this at some point to take it all in from the beginning and also to see if I agree with what I feel now. This movie did very well reception-wise, so it would make sense that there's a lot of heart and creative flare to the final product.

It's good to be back, folks.