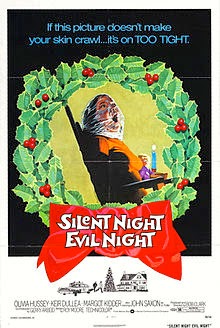 Plot overview: It's the start of Christmas break, and the various sisters of a sorority house are preparing to go home for the holidays. A male intruder – who we do not see but whose point of view we are shown – climbs up a trellis and enters the attic of the house, shortly thereafter killing one of the girls, Claire (Lynne Griffin). Another sister, Jess (Hussey) then receives a bizarre and threatening phone call from what sounds to be like several strangers; fellow sorority sister Barb (Kidder) is quick to curse off the caller and hang up. The phone calls, however, do not stop, but grow increasingly more concerning and scary. The situation at the sorority house gets worse when Claire's father (James Edmond) arrives, and Claire is nowhere to be found, leading to a police investigation that results in the discovery of more missing girls' bodies.

First off, Happy New Year! Hope that your year has been off to a wonderful start. Sorry again for the lack of posts over the past few months. Moving right along...

This movie was so fantastic. Like shockingly, inspiringly good. Shame on me for never seeing it until this past Christmas season, when it was an obvious – and perfect – choice. The original Black Christmas remains famous and significant to this day for serving as a clear and important precursor to the modern slasher genre, predating Halloween by 4 years. But if John Carpenter's classic is the first true slasher film, then Black Christmas is a pioneer for the genre.

What struck me most about this movie is how truly scary it is. By this point, we're used to unseen killers lurking around corners and stalking their prey, but the proximity of this murderer to the girls was especially eerie. The most terrifying aspect of this movie is hands down the psychosis of the killer, specifically as heard in the phone calls. From the first phone call at the beginning of the movie right up through the end, we are subjected to an uncomfortable, chilling horror via what we hear over the phone. These calls legitimately gave me chills; they were just that disturbing. The graphic nature of the calls surprised me as well, given that this movie was from 1974. Then again, this is a fairly racy movie, mainly thanks to Barb, who is super sassy and angry. I love Margot Kidder, and seeing her bring on the attitude was a treat.

I was also really surprised to see Olivia Hussey in the lead role of Jess, a kind, understanding girl caught up in troubles of her own. Hussey, who came to great fame in Zeffirelli's 1968 classic, Romeo and Juliet. A few years later, Hussey provides us with what I thought was some serious overacting in this horror film. Her foreignness sort of bugged me; I really thought she was too overdramatic, which says a lot given that she's the 'final girl' prototype.

Other familiar faces are John Saxon (A Nightmare on Elm Street, A Nightmare on Elm Street 3: Dream Warriors) as the stoic police lieutenant, Andrea Martin as sorority sister Phyllis, and Keir Dullea as Jess' manic boyfriend. Another noteworthy performer is Marian Waldman as house mother Mrs. Mac, a lush who provides some serious comic relief.

The screenplay was written by Canadian A. Roy Moore, who claimed that he based it off of a rash of Quebec-area murders around Christmastime. Critics, however, argue that the story is based off of the urban legend of the babysitter and the caller upstairs. Director Bob Clark is, of course, the famous co-writer and director of A Christmas Story. Together, both films make for some serious Christmas film cannon.

Black Christmas kept me interested the entire time. I was so fascinated by the various characters, Claire's weird father, the various sorority girls, Jess' boyfriend Peter. I wasn't sure who was safe and who was not, and I loved all of the point of view scenes we got from our anonymous killer. The phone calls, I will stress again, we absolutely thrilling and creepy. Towards the end, when we're subjected to the police's phone technician trying to trace the call, the suspense is both irritating and cathartic. This film is masterful.

The deaths in the movie are varied and creative, ranging from some deaths that are brutally up-close and personal to others that happen offscreen. The gore is present but minimal but satisfying; the film does not center on blood, but it is certainly there. Plot twists lead us to the verge of sanity and security as we dwindle into despair and back again, worried about who the killer is and just where he may be at any given moment. It is a veritable roller coaster ride of emotions.

Final critique: I can't stress enough how fantastic this movie is. While it's certainly perfect for the holiday season, I would recommend it for a good scare throughout the year. Those who scare easily should simply stay away because this film is packed with terror, suspense, and a looming sense of danger and death. Both while watching and immediately afterwards, I was aware that Black Christmas had earned itself a spot among my favorite horror films.