It embarrasses me to say that I've not blogged in almost a year. I've seen dozens of excellent and awful horror movies over the past few months, which I hope I can find the time to review. I just saw Crimson Peak on opening night though, and it was so good I was driven to write about it immediately. 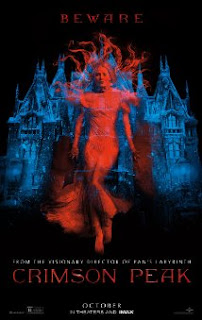 Plot overview: Around the turn of the 20th century, young and driven Edith Cushing (Wasikowska) is a Buffalo socialite with no interest in parties or the petty competition between the girls of her class. Instead, she aspires to be a writer like Mary Shelley, and is currently working on her manuscript for a ghost story. With the ability to see ghosts from a young age, Edith feels most comfortable in this genre. Her life changes when a young, handsome, and wealthy baronet Sir Thomas Sharpe (Hiddleston) and his gorgeously severe sister Lady Lucille (Chastain) come to town, looking to raise funds to reopen the red clay mines underneath their ancestral home, Allerdale Hall, located in the barren countryside of Cumbria in northern England. After Edith and Sir Thomas fall in love, she moves into the Gothic English mansion with nothing to lose, finding it in a dilapidated state as the Sharpes try to regain their family fortune from the red earth, which has earned the home the nickname Crimson Peak. Her new husband and his sister, however, are not as they seem, and Crimson Peak can barely conceal its bloody past, which Edith must now bring to light.

Every once in a while, a horror movie comes along that changes the game. Crimson Peak is one of those films. Finally, del Toro has done it again, bringing to life a magnificent Gothic tale filled with equal parts romance and terror.

I've seen the trailers for this movie for months, and obviously what captured me the most was the incredible visuals. If nothing else, I knew I had to see this movie to see the house. What I didn't know until seeing the film, however, was what a central role Crimson Peak would actually play in the plot, not only as a setting, but as a living, breathing, and bleeding character.

Now I don't think I've ever properly read "The Fall of the House of Usher," but from the second the characters arrive at Allerdale Hall that's what I was forced to think of: a plot where the home itself becomes as important as any of its residents. True to the trailers, this set was incredible, truly a work of beauty. I don't know what was physical and what was CGI, but entering this house was like entering some fantastic and slightly spooky fairy tale mansion, as we've seen before in works of del Toro such as Don't Be Afraid of the Dark, only to a much bigger extent here. It was so gorgeous it makes me upset. On top of that, the props and costumes were amazing, too. For the entirety of the movie, you get sucked into this Gothic world filled with flowing gowns and overstuffed pijamas, long capes and elaborate hair. From the beauty to the blood, this movie was so pretty.

There was certainly a lot of del Toro flair to the film, starting with the storybook opening. The entire ghost plot was extremely reminiscent of The Devil's Backbone, another beautiful, beautiful ghost film. Movies like these remind me why I'm so obsessed with ghost stories: there is a sadness, a lasting sorrow, a pervading beauty behind the metaphor of ghosts and their presence between the physical and spiritual worlds. Del Toro loves working with this theme, the idea that a ghost is a spectral apparition of the past, of some emotion that was too strong to fully leave the Earth, and we love watching it.

The characters were beautifully cast and I'm happy the original choices of Emma Stone and that annoying British actor who I won't name didn't work out, although I think Emma would have done a nice job. I actually haven't seen much of Wasikowska, but the audience should fall for Edith immediately. In fact, the audience should fall for everybody; Hiddleston is dreamily charming albeit creepy as Sir Thomas (it's nice to see him not so done up as Loki) and Chastain–one of my favorite actresses of the moment–is eerily beautiful. She didn't deliver the strongest, but she kept the movie creepy. New(ish)comer who you should expect to see more of Charlie Hunnam as Edith's childhood friend Dr. Alan McMichael was also very pleasant in his very standard role, which rather reminded me of Raoul in The Phantom of the Opera.

Horror wise, the movie is spooky and at times unsettling but not terrifying. What got me the most was the surprise gore and violence that would pop its head up occasionally, causing the audience to jump back in surprise from an otherwise tranquil plot. I was so shocked, in fact, at some of the gore, which isn't nearly as bad as what we're used to, but strangely poignant and used in effectively small doses. The ghosts themselves were especially gross because aside from being mere apparitions or floating sheets, they were in fact quite corporal, hollow specters of corpses, skeletons, rotting flesh, and so much blood. They really spice up the movie.

In terms of faults, there are a handful. The pacing was a little off, some exchanges and maybe scenes felt unnecessary, and all in all, the script probably could have used one more look through and the film maybe could have been edited one more time. The biggest problem of all, however, is the lack of a motive. I thought the plot was a little unfounded, despite a brief explanation by some characters and a lovely monologue by Chastain. I don't know; I just didn't see the need for all the horror and gore taking place after we got the 'big reveal.' Fortunately, the movie is so pretty that you almost forgive any oversights.

Lastly, I need to point out the score. The music, composed by Fernando Velázquez (Devil, The Orphanage, Mama) was so entrancing and moving I couldn't stop listening to it and stayed through the final credits just to hear more. The main romantic theme throughout the movie was so beautiful, I tried looking for it online but it's not up yet. The score alone was enough to make me want to buy this movie the second it comes out; add in the sets and costumes, and I was totally sold.

Final critique: This movie was so fantastic. I think it will join the ranks of other del Toro classics like The Devil's Backbone and Pan's Labyrinth, although it may not be taken as seriously since it's so heavily horror. Crimson Peak is the perfect ghost story (with its own modern twists), the perfect Gothic romance, the perfect mystery. The most dynamic character is Crimson Peak itself, filled with secrets living and dead; a visually stunning foreground and background to the movie's events. I highly recommend this movie, especially before Halloween. Again, it's not too scary, but the scares are enjoyable. Mainly just eerie with some good scares spread throughout, and the violence/ gore that will catch you off guard. Seriously, bravo.