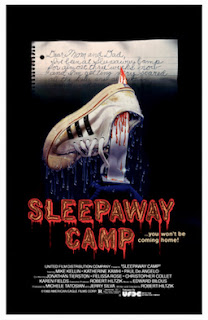 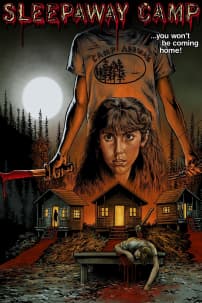 Plot overview: Years after watching her family die in a tragic boating accident, the incredibly shy Angela (Rose) is sent to summer camp with her popular cousin Ricky (Tiersten). Although she begins to grow comfortable with Ricky's best friend Paul (Collet), most of the other kids at camp insist on bullying her. Unfortunately for them, there's a killer on the loose. Can these kids survive sleep-away camp?
All I wanted before bed tonight was to cuddle up to some classic '80s horror, and I'm so glad I found this movie. Reviews online about "that twist ending" piqued my interest, so I decided to give it a shot. You can't beat those great movie posters either, I had to include the second one because I thought it was just perfect.

To be fully honest, I was nervous at first. I wasn't expecting any great production quality, but the first 10 or so minutes of the movie were pretty rough in terms of the over-acting and melodrama. As you give the movie time to progress, however, its standard slasher plot becomes filled with ridiculous details that make it obvious why this movie has such a strong cult following. First and foremost, this movie is CAMP— pun intended. It has plenty of on-the-nose '80s cheesiness that might not be for everybody but certainly works for Horror Buff (sometimes). Some parts of the movie become so unrealistic that you truly have to suspend your belief and go along for the ride, and if you stick through it, you will be happy that you did.

Even when the acting was subpar or the plot seemed a little weird, the gory deaths in this movie made everything worth it. The makeup team did an amazing job here, and the gore alone elevated this movie so far up in my book. While the majority of the movie isn't super scary, the gore alone carried the movie forward, making it even more memorable.

The most obvious thing about this movie is that it's a Friday the 13th-inspired pastiche from start to finish. The '80s were the golden era of teen slashers, and Sleepaway Camp seemed to just lower the ages of its victims, stay a little less raunchy, and add some Freudian motives to the plot. I was shocked to see how young most of the cast was, and while none of the acting in the movie is anything to write home about, some of the younger actors were leagues ahead of the adults in the film. And how cool is it to see the late Robert Earl Jones, father of the legendary James Earl Jones, making an appearance? Regardless of its very literal camp quality, there is something so alluring about '80s slashers—or about the perversion of places like summer camps, which should be happy—that helps keep the plot enduring even 36 years later.

What struck me most about this movie was probably the character of Dr. Martha Thomas (Desiree Gould), Ricky's mother and Angela's aunt. Any scenes including her—as well as the strikingly psychoanalytic and dreamlike flashbacks featuring Angela's dad—were visually and aesthetically incongruent with the rest of the film and added such a fun dimension to the otherwise straightforward plot. I don't know if it was Gould's personal choice or the director's, but the way she acted Aunt Martha was so alarming and unsettling, like something out of a Tim Burton film. In general, the subplot of Angela's past added a psychodynamic level to the movie that only adds to what seems like a fairly obvious whodunnit mystery.

This movie caught me off guard a few times. I had a really hard time with some of the characters/ subplots, especially the camp's head chef (Owen Hughes) being an unabashed pedophile. I don't think we would ever even see that in a kitsch movie today. Watching the film is like looking into a time capsule of cinematic oddities: There are a few things between nudity and implied violence that I don't think would fly today. For what it's worth, the movie is a wonderful exploration of the terror of puberty and adolescence, as well as a commentary on the stark contrasts between your All-American summer camp setting and the hectic reality of teenage life, not to mention the ensuing struggle to establish an identity. Throw in some selective mutism, a repressed Oedipus/Electra complex, and some definite PTSD, and you've got a lifetime of therapy wrapped up in this film.

They really weren't kidding about that twist ending, huh? I love slashers where the identity of the killer is a mystery, because so often even the simplest answer is hiding a truth that you never would have guessed. The resolution in this movie was not what I was expecting, and while it opened up so many questions for me (I want to learn more about the pathology going on here), it's just that sort of ending you will honestly never forget. The best part was that awful, animalistic noise. So great.

Final critique: This movie is not for everybody, but if fans have kept something popular for 36 years, I think it's a huge credit to a film's reputation. This hit my sweet spot for a cheesy '80s slasher, and it brought with it psychological dimensions I was never expecting to watch. Between the fun mystery in the plot and the roller coaster of melodramatic acting, questionable script-writing, and that amazing surprise ending, this movie would is a perfect watch to pair with a fun group of friends and a big bowl of popcorn for a relaxed movie night. The movie really isn't very scary—just a few jumps scattered over a fairly suspenseful storyline—but the death scenes bring out gore that will have some people covering their eyes and trying to hide. Campy to be sure, and by far not the best the '80s brought us, but an enduringly curious horror movie that you can appreciate nonetheless.