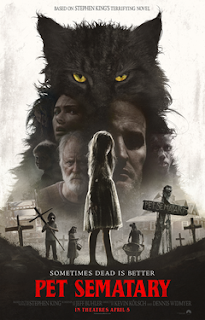 Plot overview: After moving from Boston to Maine, Louis Creed (Clarke) and his wife Rachel (Seimetz) are hoping for a more calm way of life so that they can slow things down while raising their two kids. Shortly after settling in, however, the family begins to be plagued by strange events, culminating in the death of their beloved pet cat, Church. The Creeds' new friend and neighbor, Jud Crandall (Lithgow), decides to help with their grieving, so he takes Louis beyond the local pet 'sematary' to a dark and ancient place to bury Church, who comes back home later that night, seemingly alive but fundamentally changed. When disaster strikes the family again shortly thereafter, the temptation to bring the dead back to life proves too strong for Louis, even though he knows that whatever comes back will not be the same as what was lost.

I waited a few weeks to see this movie in theaters, and I ended up having an afternoon showing all to myself. The projectionist even fast forwarded past all the previews so that I could get straight to the movie. Sometimes living in a small town has its perks for Horror Buff.

I've said it before and I'll say it again, but considering his prolific and unmatched impact on horror as we know it, the majority of Stephen King's body of work that was adapted to film fell victim to the era of production, that is to say so many of his books became movies cursed by the production quality of the '80s. I think The Shining is a stunning exception to this, but when you think about movies like Thinner (which is still fun) or especially Graveyard Shift, even Cujo and Christine to a lesser extent, I think it becomes more apparent. Anywho, nothing a remake can't fix... enter Pet Sematary.

The original movie from 1989 was one of the earliest horror movies I was continuously exposed to while growing up, and it has had a very lasting impression on me. It felt like it was always on TV, and some of my earliest memories of horror are from this film. I think one of the images that has scared me most throughout my life, all because of how young I was when I would see it on TV, was that of Rachel's sister and her case of spinal meningitis from hell. That being said, my interest was piqued when I learned that this new version was coming out.

My general thoughts are that this was a fun adaptation but not groundbreaking. It had a lot of familiar elements with some other scattered references to King's mythos (e.g. Derry sign while Rachel is in traffic), but it also made some bold choices to change the plot of the book and the original. Even though Horror Buff feels like a purist so much of the time, I didn't see the harm in freshening up the story with some of these new or altered bits of plot.

I really enjoyed the production quality and I thought the film was pretty lovely to watch, including all that beautiful Maine wilderness. I especially loved the creepy animal masks the local children would wear on their processions into the Pet Sematary when laying a lost loved one down; this was one of those eerie things just believable or fun enough that a small town might do and that would look as terrifying to outsiders like Rachel as it did to us as viewers— but that might be totally normal to locals who had observed the tradition for generations.

I also thought the acting was pretty solid throughout the movie, or at least in lazier scenes that it never got into that awful family drama aspect that we've seen in so many horror movies focused around the family unit. I recognized Clarke's face but I'm not too familiar with his other work; he could have fooled me that he's Australian! I didn't love him in the beginning but he grew on me during the film. Amy Seimetz (The Possession, Alien: Covenant) was given a sort of strange role with Rachel, who really misses out on most of the action. I liked her but I didn't feel especially moved by the re-exploration of her childhood trauma, which I felt she could have acted more strongly. She was great in her final scenes, however. I think one of the smartest plot change decisions this movie made was to kill and reanimate Ellie (Laurence) instead of Gage (Hugo and Lucas Lavoie). I thought the young Laurence has a great look about her and I wonder if we will see more of her, and it felt more natural to utilize a more mature actor—even though she's still a little kid—to play such a crucial role in the movie. I laughed out loud at the early scene when she comments how "cemetery" is spelt wrong on the sign at the pet sematary. ELLIE IS ALL OF US. Especially as her undead version, Laurence brought a lot of morbid fun to the movie— there was something mature about her contemplative nature upon realizing her own deadness and incompatibility with the natural world. I could have done without that demented ballet scene, though.

Pretty much the whole time, I was expecting the infantile Gage to get killed, and as the first movie showed us, there is only so much you can do with a child that young coming back as some demonic zombie. I was even nervous that it would become special effect heavy to carry that all out, given how young Gage was. So as my stomach was all in knots anticipating the inevitable during the birthday party scene, it's fair to say I was really surprised with how that all ended up. Why wouldn't these people have built a giant fence along their property line? Forget the creepy cemetery and ancient Indian burial ground (*yawn*)— that highway was a nightmare! Admittedly, I jumped pretty hard the first time a truck sped by early on in the movie. After that, I really didn't think this movie was too scary. There was some classic suspense, and even just the right amount of gore between the flashback to Zelda's (Alyssa Levine) death, Ellie attacking Jud (Achilles tendon iconic to the original), and that particularly enjoyable early scene when Louis tries to save former college student and future ghost Victor Pascow (Obssa Ahmed) following an accident. I chuckled during Jud's death scene as we see demon zombie Church licking his little cat lips in anticipation— that was great.

Fun fact: Stephen King was inspired to write this book while working at the University of Maine (much like Louis) after his family cat was killed by a truck on a busy nearby road. He had to bury the cat and explain what had happened to his daughter when he started to wonder, what would happen if the cat could come back, only different?

Otherwise the horror here was kind of odd at times. I think it's almost more that I found myself too busy questioning the logic behind everything that I couldn't focus on what exactly was happening. Why does Victor get to haunt Louis? Especially when there is a special burial site to reanimate the dead, where does a random ghost come into play? Why in the world did Jud ever think that bringing Church back to life would be a good idea, especially given his story about his pet dog and the implications about his late wife? Are the dead simply brought back to life with a grudge, or is this more of a demonic possession happening? While the end of the movie is being considered shocking now, I felt the last couple of minutes were not wholly satisfying and that the movie even ended on a strange note. (Not to mention it breaks my first Cardinal Rule!)

I know the Indian burial ground trope is tired and has received its fair share of due criticism, but I enjoyed this movie's quick references and short sighting of the wendigo, a prevailing piece of Native American folklore that scared me a lot as a kid. I think this movie examines the breakdown of the nuclear family unit, exploring not only death but grief and loss in general. I wonder if there is commentary on the guilt so common in grief, and if that guilt can be extended to America's bloody colonial history. As Jud mentions, perhaps burying Church in the burial ground in the first place started a string of events that would ultimately lead to the Creeds' demise, or maybe the events were totally random. Is there an element of revenge here? Who are the demons returning in the dead's bodies, anyhow? Or am I overthinking it?

Final critique: This wasn't a bad movie, but it wasn't the amazing remake you might anticipate after almost exactly 30 years (the original was released April 21, 1989). Then again, the actual material here is pretty specific, and I don't think there was much more you could have changed without losing the story, or without losing the audience who is first and foremost dedicated to King. Though not a terribly scary movie, the combination of jump scares, brief violence/ gore, and the generally dark mood of the film might mean some people will have to sit this one out. The moral dilemma here is enough to have you thinking about this movie for a while after. How far would you go if you had the power to reverse death? Or is it better to accept that the loved one you lost can never come back, at least not as their original self?